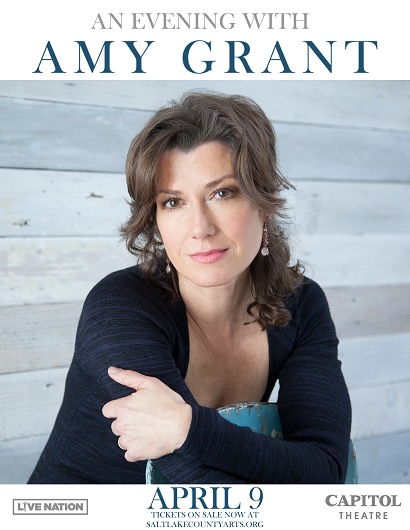 Six-time Grammy® award-winner and multi-platinum recording artist Amy Grant will perform for one night only at the Capitol Theatre on April 9th. “An Evening With Amy Grant” will treat concert attendees to some of Grant’s biggest hits as she performs songs from her extensive repertoire.

Amy Grant’s career spans more than 40 years and stretches from her roots in gospel into becoming an iconic pop star, songwriter, television personality and philanthropist. Grant is beloved for both her Contemporary Christian music and mainstream hits like “Baby Baby,” “Every Heartbeat,” “That’s What Love is For,” “I Will Remember You,” “Lead Me On,” “El Shaddai,” and more. With three multi-platinum albums, six platinum albums and four gold albums, her total career album sales have exceeded 30 million. Grant’s radio chart success has been consistent throughout her career with six No. 1 hits, 10 Top 40 pop singles, 17 Top 40 Adult Contemporary tracks and multiple contemporary Christian chart-toppers. In addition to her six GRAMMY® Awards, Grant has earned 26 Dove Awards (including four Artist of the Year awards), was inducted into the Gospel Music Hall of Fame and has been awarded a star on the Hollywood Walk of Fame.