Live at the Eccles Celtic Thunder 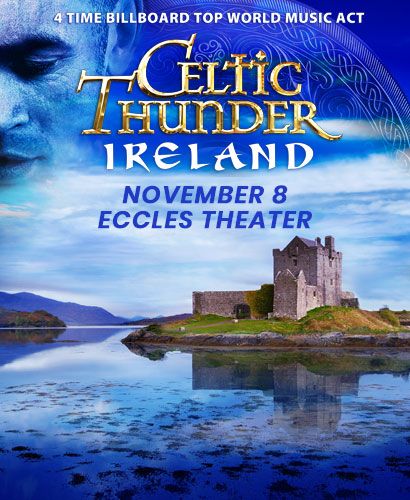 Celtic Thunder IRELAND is a brand-new revue show that revisits their most popular Irish and Celtic songs of the past decade and celebrates the influence of Irish and Celtic music around the world, all with a unique Celtic Thunder twist, of course. Drawing from their most popular Television Specials and hits since their inception, IRELAND features the songs and performances that launched Celtic Thunder into the hearts and homes of audiences across the US and Canada, winning them the mantle of Top World Music Act in Billboard five times over. Formed in Dublin in 2007, Celtic Thunder is a multi-dimensional musical, and theatrical ensemble celebrated around the world for emotionally powerful performances and state-of-the-art production. Billboard magazine named Celtic Thunder the Top World Album Artist (2008, 2009, 2011, 2015, and 2016) while the group has had Top 10 songs on the World Album charts every year since 2008.