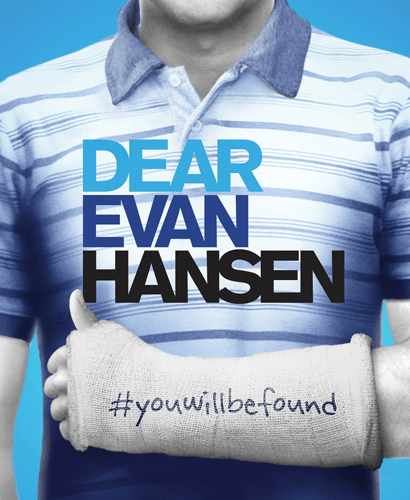 This event has been canceled. For more information please click HERE.

DEAR EVAN HANSEN has struck a remarkable chord with audiences and critics everywhere, including The Washington Post who says DEAR EVAN HANSEN is “one of the most remarkable shows in musical theatre history.” The New York Times calls it “a gut-punching, breathtaking knockout of a musical.” And NBC Nightly News declares the musical “an anthem resonating on Broadway and beyond.”

The production has announced that it will host a digital ticket drawing offering fans the chance to purchase a limited number of $25 tickets available per performance. The digital drawing will begin accepting entries 48 hours prior to the first performance in Salt Lake City and will be accepted until 9 a.m. local time the day before the performance. Fans who have been selected will be notified daily via email and can then purchase up to two (2) tickets at $25 each. The ticket drawing will continue on a rolling basis for every performance in the engagement.

Entrants must be 18 years or older. A valid, non-expired photo ID that matches the name used to enter is required for pickup. Seat locations awarded by the drawing are subject to availability. Additional details and times will be announced in each tour city by the local theater box office prior to the engagement.

Additional lottery requirements can be found at www.luckyseat.com/dearevanhansen.

Recommended for ages 12 and up. No babes-in-arms. All patrons must have a ticket regardless of age.

Captioned performance Saturday, March 7th at 2:00PM.
Patrons who are interested in the captioned services should select seats located on Orchestra Right on the Main floor (excluding Orch Pit seating).

Audio Description performance Sunday, March 8th at 6:30PM.
Patrons who are interested in the Audio Description services can purchase tickets anywhere in the theatre. When arrive to theatre on the day of the performance, patrons will need to go to the Patron Services window, in the lobby, and ask for the Audio Description Device. There, they will receive instructions on what channel to selected on that device. It is recommended to arrive at least 20-30 minutes prior to showtime, since the audio description will begin prior to the start of the show.