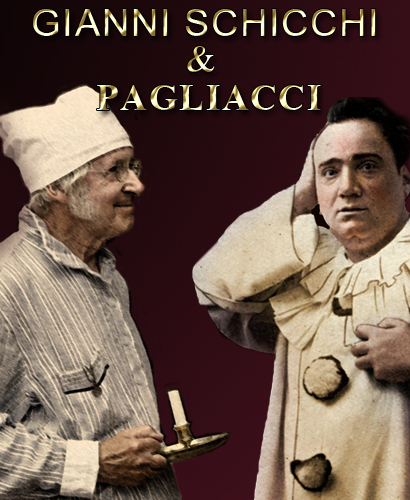 “Gianni Schicchi,” a one-act comic opera by Puccini. In a series of hilarious pranks, secret deals and one ridiculous plan…Gianni Schicchi succeeds in tricking a greedy family into making him rich and assuring a comfortable future of two young lovers.

“I Pagliacci,” a one-act opera by Leoncavallo, is a play-within-a-play, in which actors re-enact on the stage a situation that has impinged on their personal lives. Balancing humor, romance and darkly violent moods, “I Pagliacci” tells the story of an acting troupe led by a jealous man who is ultimately driven to murder his wife and her lover.

Late Seating permitted ONLY AT INTERMISSION.

Age policy: Recommended ages 8 and up. No babes-in-arms. All patrons must have a ticket.