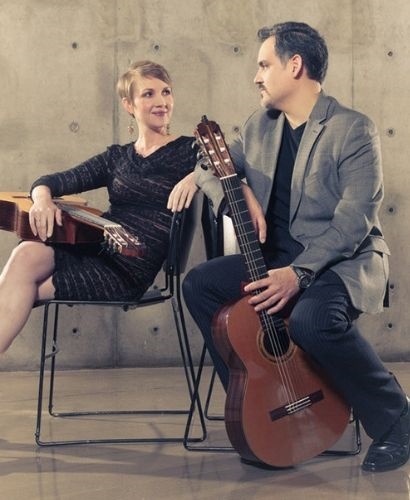 Please note: Presenters may have additional COVID safety requirements for shows. Patrons will be notified of any changes to safety requirements determined by the presenter. Please see Current COVID Health and Safety Guidelines at Arts & Culture Venues page for more details on venue requirements.

Kithara Duo (Olga Amelkina-Vera and Fernand Vera) was formed in 2002, when they were graduate students at the University of North Texas. Since then, they have performed nationally as well as in Europe and South America. Kithara Duo’s critically acclaimed debut CD, Beings, was released by Soundset Recordings in 2011. The duo is home to an international award-winning composer (Olga), and their first album is a world premiere recording of her music for guitar duo. In addition to Olga’s original compositions, Fernand and Olga regularly contribute to guitar duo repertoire through arrangements and transcriptions of music by such composers as Albeniz, Ferrabosco, Soler, and Vivaldi. Their second CD, Lingua Franca (2015), features their new arrangements of music from the Renaissance to the 20th century. Kithara Duo are faculty at Collin College in Plano, Texas, where Fernand directs the award-winning Guitar Studies program, and Olga teaches in the guitar, theory, history, and composition areas. They organize the Collin College Guitar Festival, held each spring semester, and Collin College Guitar Competition, held each fall. For the most up-to-date information, please follow www.facebook.com/kitharaduo.

Olga Amelkina-Vera grew up in Belarus and moved to the United States in 1997. She earned her Bachelor of Arts degree Summa Cum Laude from the University of St. Thomas in Houston, and her Master of Music and Doctor of Musical Arts degrees in Guitar Performance from the University of North Texas with a related field in Music History. Olga was a prizewinner in the Eastfield Collegiate Guitar competition and a finalist in the University of Texas at Dallas International Guitar Competition. An active performer and award-winning composer, she has received commissions for solo guitar and guitar ensemble music, as well as for compositions for guitar with other instruments and voice. In 2013, Olga won first prize in the Japan Guitar Ensemble Composition Competition for her guitar quartet Cattywampus Rompus, and played a solo recital and gave an interview to Gendai Guitar during her trip to Tokyo. She was the first prize winner of the Austin Classical Guitar Society Composition Competition in 2009 and 2012 for her guitar quartets Ninochka and Nebulae. Her compositions are published by Productions d’Oz, including two works selected for The Frank Koonce Series. In 2010, Olga became a founding member of Presti, the first professional all-women guitar ensemble in the United States, active until 2014. As a member of Presti, Olga recorded a CD which featured several of her original compositions and arrangements. She maintains a busy performing, recording, and masterclass schedule with Kithara Duo.

Olga strives to expand the guitar repertoire through arrangements and new compositions. Her interest in early music has led her to study and arrange, for guitar, the lyra viol music of seventeenth-century England. Olga’s scholarly articles have been published in Soundboard. Her other interests include fine arts, literature, and foreign languages. She is finishing her Master’s degree in Composition at Southern Methodist University, where she is also an adjunct faculty member in the music history and theory departments. She is faculty at Collin College in Plano, TX, where she teaches guitar, composition, music theory, and music history.

Since 2012, Fernand has directed the thriving Guitar Studies program at Collin College in Plano, TX. He is the Artistic Director of the annual Collin College Guitar Festival, held each spring semester. He is also the creator and director of the annual Collin College Guitar Competition, the only event of its kind specifically for Texas community college students, held every fall semester. For more information, please visit our Collin College Guitar Studies website: http://www.collin.edu/music/guitar/.
As an educator and author, Fernand has written several guitar method books: The Beginning Guitar Method, Vol. 1, now in its fifth edition (co-written with Olga Amelkina-Vera), The Beginning Guitar Method, Vol. 2 for continuing guitar students, and Guitar Fitness: Technical Studies for the Advancing Guitarist. These publications are used as guitar studies curriculum at Collin College for class guitar and applied lessons.