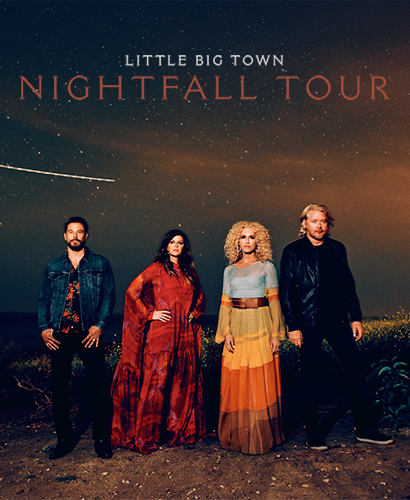 The Little Big Town shows at Eccles Theater on 1/22/21 and 1/23/21 (originally scheduled for 3/27/20 & 3/28/20) has been postponed due to safety and health concerns. New show dates will be announced in the coming months. Please hold onto your tickets; there is nothing you need to do; your original tickets will be valid for the rescheduled dates.

Little Big Town has earned more than 40 award show nominations and in the past five years has taken home nearly 20 awards, including multiple GRAMMY, AMA, People’s Choice, CMA, ACM awards, and an Emmy award. The Country Music Hall of Fame inductees (2014) went onto receive their star on the Nashville Walk of Fame in 2017. In July of 2018, The Country Music Hall of Fame and Museum in Nashville launched their lead, yearlong exhibit called LITTLE BIG TOWN: THE POWER OF FOUR showcasing the bands powerful and storied 20-year history within the country music community. The band recently launched 4 Cellars wine, their first non-musical project as a band, with Browne Family Vineyards. The collaboration features exclusive wine blended by the foursome and recently released canned wine spritzers called “Day Drinking.”

For more information on Little Big Town visit LittleBigTown.com or follow them @littlebigtown.

This show is recommended for ages 8 and up. Everyone must have a ticket, no babes in arms.