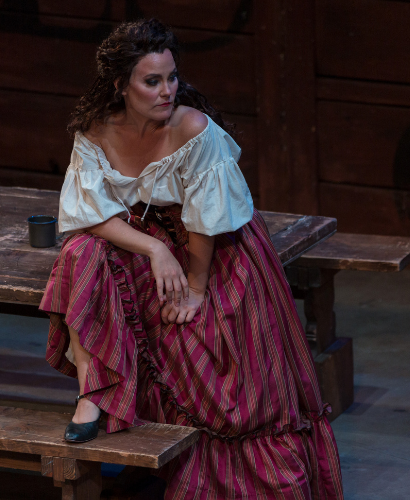 Sung in French with English supertitles.

Runtime: Approximately 90 minutes with no intermission

Opera Highlights:
Peter Brook’s 1981 La tragédie de Carmen (The Tragedy of Carmen) is more than a shorter, recut version of Bizet’s Carmen. While it pares the cast down to four singers, accompanied by a chamber orchestra, and is filled with musical passages from Bizet’s famous opera, La Tragédie is a nearly complete reworking of the story focused on the intense interactions and tragedy of the four central characters.

· Utah tenor Isaac Hurtado makes his Utah Opera debut in the role of Don José, an officer who has his eyes naïvely set on Carmen.

Plot Summary:
The young officer Don José gets in over his head when he catches the eye of the beguiling Carmen. After aiding her escape from the law, Don José is jailed, demoted, and kills his superior Zuniga before running off with Carmen. Meanwhile, Don José’s childhood sweetheart Micaëla searches for him as he confronts the other men in Carmen’s life: Escamillo and her husband, Garcia.

ADDITIONAL INFORMATION:
Due to Salt Lake County’s current capacity restrictions, the performances are currently sold out to subscribers, who will be contacted by USUO Patron Services for information about seating and attendance preferences.

Artists and programs are subject to change. No refunds