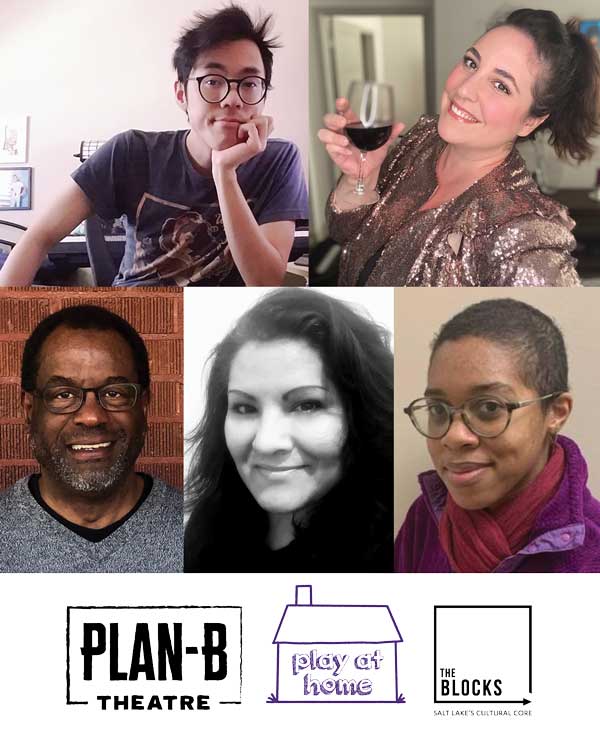 Plan-B Theatre Company is thrilled to announce participation in the #PlayAtHome project, a series of short plays to be enjoyed at home, commissioned specifically for this moment of unprecedented isolation, to inspire joy and connection for all. The goals are simple: pay some artists, invite people to get offline and into their imaginations, and inspire joy and connection. Read more in The New York Times.

Dee-Dee Darby-Duffin’s APHASIA A mother and daughter struggle at mapping out a new way to communicate, which they didn’t do all that well in the first place. How do you talk to someone who can’t answer you back? The discovery of a “new normal” between mother and daughter when roles are suddenly reversed.

Tito Livas’s SHINE A LIGHT Young Dev gets in trouble for trying to burn ants and falls asleep in his bed. Upon awakening he realizes he is in the world of the insects. A roly poly, two sassy bees, a couple ants, and an old worm convince Dev that no matter our size, we all serve a purpose.

Tatiana Christian’s SPACE CATS Two friends, Casey and Morgan, are taking a stroll in the woods when they hear a strange noise. Then, cats appear demanding to meet their leader and become their overlords! So, naturally, Casey and Morgan take them to the White House

Olivia Custodio’s THE KIDS Catherine and Bernard have had it with the bumps in the night and suspicious, spooky rattling. They are selling their home after only three months and couldn’t be more relieved. That is, until they meet their real estate agent who tells them that maybe there’s nothing to fear after all.

Brandan Ngo’s STRANDED After being thrown overboard, Popi the pirate has been stranded on an island for seven days. For company, an imaginary friend or two are unwittingly created. Popi immediately regrets this, and has to learn to live with these new annoying friends as they confront their most embarrassing memories.

Iris Salazar’s YOU HAVE THE RIGHT A virus has been spreading throughout the country and strict restrictions have been implemented over the last two years, such as curfew, the gathering of more than six people, and shopping limitations, as well as financial assistance. The economy has not managed to recover and the high unemployment numbers continue. As per the usual human spirit and love of freedom, there is a group of Rebels who will not conform to the new way of life. Kid Garza has taken it upon herself to bring a little joy to others by hosting a Quarantine Mask-Gear-Aid paint ballooning war in an abandoned house every month.

Darryl Stamp’s MIS EN PLACE Jason plays with a new friend who doesn’t always agree with him. Amira prepares for for a virtual cooking demonstration that’s stressing her out, and her mom tries to assure her that dad will come to the rescue. Jason’s creative imagination saves the day, or does it?

STEP ONE – WE COMMISSION THE PLAYWRIGHTS Partner theaters offer playwrights $500 commissions to write 5-10 minute plays that can be performed – by any definition! – at home. We at Plan-B have commissioned Dee-Dee Darby-Duffin and Tito Livas from our Theatre Artists of Color Writing Workshop!

STEP THREE – YOU READ THE PLAYS At home, by yourself, in your pajamas. In the living room with your family or roommates. While cooking dinner or waiting for delivery from local businesses.

STEP FOUR – HILARITY ENSUES These plays are JOYFUL. These plays are meant to exist in your imagination, beyond the usual limits of what might be “possible” onstage at your local theater. They’re family-friendly world premieres that can exist in their fullness from your living room.

STEP FIVE – YOU SHARE WITH US You share images, videos, and soundbites on social media by tagging #PlayAtHome!