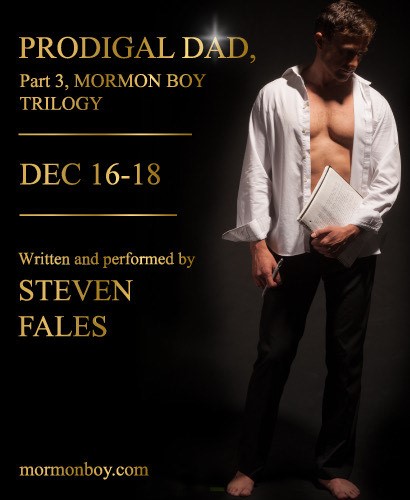 Part 3 in the Mormon Boy Trilogy

While working on his new book, Oxy-Mormon Memoirs, playwright/performer Steven Fales reflects on his successes and failures as a father in the midst of his “Great Recession” custody battle in Utah at the hands of his angry ex-wife and her celebrated Mormon mother-in-law, author Carol Lynn Pearson. As he faces the possibility of losing his parental rights completely, he ultimately conjures and confronts the one gay dad in the world who might be able to help him tell his story—his deceased father-in-law who died of AIDS long before he ever married his daughter. This searing, provocative, and profound family-law courtroom drama is the solo sequel to Confessions of a Mormon Boy and Part 3 in Fales’ “epic and powerful” Mormon Boy Trilogy. (Washington Post)

Age policy: Recommended for ages 18 and up. Not appropriate for children under 13. All patrons require a ticket (no babes-in-arms).